And so, when all is said and done, for once i’ve managed to do far more than i’ve said. Even for one as naively ambitious as myself, my goal was a little far-fetched, yet with plenty of time still to spare, i reached my goal. OK, in the grand scale of things, it’s not a particularly breathtaking achievement, or all that impressive, but i’m pretty pleased with myself.

Yep, 22 sims, 300 or so exhibits, 4 stages, 2 hunts and all the other bits and pieces that made up SL10B, and i saw them all! Some might call it madness, but the way i see it, 10 years of sl is a pretty big milestone and i was able to experience this amazing celebration in all its vibrant, gory, crazy and mind-boggling detail. In years to come, i’ll be telling my pixel kids, “SL10B… yes, i remember it well… i was there”, before boring them for hours on end with the nearly 30 gigs of images and video that i captured there!

There’s still a few days to go before it’s all over, and even though the stages are now silent, there’s still masses to see, do and experience – and, if you still haven’t made it there, why the heck not?

Returning to my mission… it had not started well: my innate sense of non-direction meant that my first sortie didn’t go to plan, so yesterday was my chance to make amends and to catch up on the exhibits that i’d missed first time around. There were a few, i admit – but more embarrassingly, most of them were quite literally just across the road from my own exhibit… talk about not being able to see the wood for the trees. Take, for example, UFO Abduction, pretty much my next door neighbour! This, along with a whole cluster of exhibits in Dazzle were within spitting distance of where i’ve been TP’ing in, yet in a whole week they’d never come within my radar.

The exhibits i’d missed, most of which were in Dazzle, with a few lurking in the Spectacular sim, are an eclectic mix, ranging from serious, rl university displays to Two Moon Paradise, where i had a good old boogie, and didn’t care in the slightest who might be watching. Then there are a number of charitable and informative exhibits, such as the Autism Society of America, right through to – and i found this one completely intriguing – the Turin Shroud in sculpties! Amazing what you can do with bump maps and a bit of imagination… what will they think of next?

One exhibit i had passed a few times, yet each time had infuriatingly refused to rez was the 1920’s Berlin Project, whose exhibit i’d enjoyed last year, but had – till now – remained irritatingly grey this year. It was worth the wait though – an exquisitely rendered art deco apartment building, with beautifully designed Bauhaus style furniture, was complemented by an authentic retro bierkeller, complete with splendidly outfitted patrons, being served by none other than Jo Yardley – the power behind the project – herself. 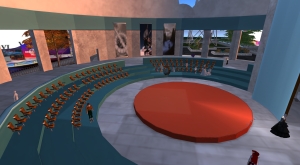 That pretty much completed my tour of the exhibits but there’s still a couple of stops on the journey i’d yet to make. First off was The Auditorium, where some pretty awesome people in the virtual world have been interviewed over the course of last week – you can catch up with them  here.

Did i mention the volcano? Thought so – lurking behind the main sims in the hills behind the time capsule is a bubbling, steaming lake of lava – apparently, volcanoes have been around sl right since the start, and some of them are still around today – you can pick up a notecard at the crater with their locations, and guess who is going to be checking them out in due course?

So that about wraps it all up – i’ll be paying a few more visits over the coming days and, when i get the time, i may even cobble together a brief machinima of the celebration. In the meantime, if you have the time to spare, how do you fancy a little challenge? Bet you can’t find all of the following items… A board game, featuring a miniature map of the SL10B sims; a couple of very cool cows; a half-buried taxicab; an ator and a couple of Linden World birds and Philip Linden with an expanding head!

Somehow, SLife is going to seem a whole lot slower in the weeks to come!

Regrets, I´ve had a few
But then again, too few to mention
I did, what I had to do
And saw it through with out exemption
I planned each chartered course
Each careful step along the highway
Sid Vicious – My Way

This entry was posted in SL, SL10B, SLarcheology, Tour Guide. Bookmark the permalink.

2 Responses to That’s a wrap