Rarely has a Friday been so welcome!

Regulars will know that life has been pretty demanding of late, with the net result that i’m currently feeling a rather dried-out, forlorn and empty husk of my usual self. What little spare energy i’ve had has found its way into the blog and my rather bolshy state of mind probably shows through in the somewhat heavyweight and caustic nature of this week’s posts! That’s one of the fun things about writing – it’s as much powered by emotion as it is by energy.

However, it’s Friday… moreover, it’s my last day in work for two whole weeks and, since i’ve not had a day off since March, it truly does feel like the light at the end of an exceptionally long and dark tunnel. Other than a day in London at the end of the month, i have no plans at all – but i don’t care – i need this holiday desperately!

So, hopefully, you’ll start to see a lighter side to these musings over the coming days, starting right now!

To speak about ‘holidays’ or ‘vacations’ within the context of sl is, frankly weird, but i do think there’s something to be said for breaking our normal routines and doing something completely different – perhaps even out of character – instead of the usual. There’s a danger that even sl can become rather dull and lacklustre if we don’t make the effort to branch out and seek new scenery, different environments and interesting people… the fact is, many of us have a tendency to grow lazy and limit our sl to a very narrow range of activities and locations – this can lead to boredom and even a kind of emotional fatigue. Even in the virtual world, a holiday is sometimes a very necessary getaway.

The question is, where to go?

Why should sl be any different from the real world? How about somewhere hot and steamy? Maybe somewhere a little bit wild and remote, with amazing views and compelling scenery? It sounded good to me.

Which is how i ended up on a rather interesting excursion, exploring the volcanoes of sl! Aw, c’mon – this is me! You didn’t honestly think i’d go to the beach or something like that, did you?

It all started at SL10B, where you may remember i had the opportunity to indulge the amateur volcanologist in me and i picked up a notecard which has pretty much been my Lonely Planet guide to the magma lakes of sl in the past week. So, for those of you who fancy something a little different from sl, why not follow in my smouldering footsteps?

Here’s my SLonely Planet guide to the lava hotspots of the virtual world: 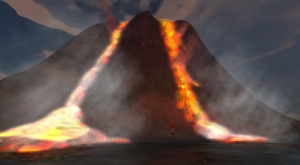 We begin with the mighty volcano in Ichelus – a great steaming pile of rock, down which flow twin rivers of fire, which finally end their journey, sizzling and hissing in the bay below. This is not a place for the unwary – wear stout shoes and watch your step: the searing magma is every bit as dangerous as it appears. Slip into its burning clutches and you’ll be sent summarily home, nursing third-degree burns and a bruised ego.

Still not edgy enough for you? Why not take a stroll around the crater’s edge and peer into the fiery depths below, and if that’s not foolhardy enough, you can always inch your way along the diving board that hangs invitingly over the burning maw… but don’t linger too long, or you’ll be toast!

If Ichelus gets you a little too hot under the collar, how about an arctic adventure in Laptev? – The second stop on my seismic sojourn is not what you might expect. To begin will, you’ll need to prepare yourself – wrap up warm, but make sure you pack the scuba gear, because not only is this particular volcano to be found in the snowy wastes of Ice Bay, but you’re going to need your water wings if you want to explore it!

Look carefully into the chilly waters surrounding the ice shelf and you’ll see the telltale pop of bubbles streaming from deep beneath the surface. Take the plunge and you’ll discover the beast that lurks below – a simmering chasm of hot lava and steam that glows redly within the ocean depths.

You really do feel that you’ve entered a National Geographic documentary – the crater is so well constructed, complete with algae-encrusted fumaroles and escaping gas bubbles, that it could almost be the real thing… or maybe it’s just me getting carried away – perhaps it’s just the chill water affecting my brain?

Time to warm up again, with a trip to Orwood. As volcanoes go, Orwood is pretty good fun, provided you remember your asbestos gloves and hard hat! You will definitely be needing that hard hat, since Orwood has a delightful habit of popping out car-sized cinders of glowing lava, which hover unnervingly in the air above you, before tumbling down the steep and treacherous slopes below.

It doesn’t seem to bother the locals though, who seem to think nothing of setting up home within a mere stone’s-throw – sorry, dreadful pun – of the angry mountain. You can see why they choose to live there – the mount sits within a limpid blue lagoon and creates an awe-inspiring, if somewhat terrifying backdrop to daily life.

A somewhat less dramatic, but rather eerie volcano can be found at Okeanos. Once again, sl people don’t scare easily and there are a few builds to be found nearby… but where are the people? 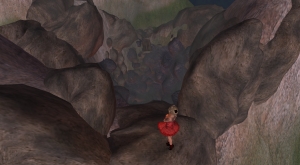 This is an eerie and desolate place – the air is full of the sound of seething, molten rock, and the approach to the crater is littered with the bones of previous, less cautious travellers, or perhaps the unfortunate occupiers of the shack that lies in the foothills?

Gazing down into the pit, hot coals entice you to step closer – but don’t do it – that way disaster lies. Far better to make a hasty exit and leave the mountain to the eagles that soar high above it.

Incidentally, if you need to work off the adrenalin, take a quick hop across the water to the vehicle testing grounds, where you can rez something fast and dangerous to take the edge off your thirst for danger – it’s far safer than the volcano!

By now, you should be a seasoned sl volcanologist… but are you ready to tackle Mount G’al?

i give you fair warning, if you dare to ascend this portal to the underworld, you will not only die, but die frequently and at the most irritating moments! If Dante’s inferno has an sl equivalent, it is Mount G’al: a monstrous, thundering, primal outpouring of seismic ire! 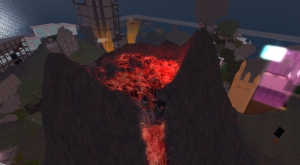 The mountain is certainly an atmospheric place: rivers of lava flow down its sides, and a great statue of fire stands in homage nearby. At the foot of the mountain, in stark contrast to the infernal cauldron above, stands a small temple, crowned with an ancient stupa – almost as if the forces of peace and wrath are held in an uneasy equilibrium – the power of nature, against the power of faith.

However, all is not what it might seem, for Mount G’al hides a legendary – and some would say, completely mythical – secret. It is said that, hidden within the bulk of this great mountain are secret passages that will give the intrepid explorer safe passage to reveal the secrets of this most remarkable of sl landmarks, and if you have a brave heart, (and no sense at all), then who knows what wonders might lie in store? Well, there’s only one way to find out!

Did i discover any secret passages? Were the age-old mysteries of the rocks laid bare to me? Did i survive to tell the tale? Sorry – that would be telling. If you want to know what’s hidden at Mount G’al, you’re just going to have to find it for yourselves! 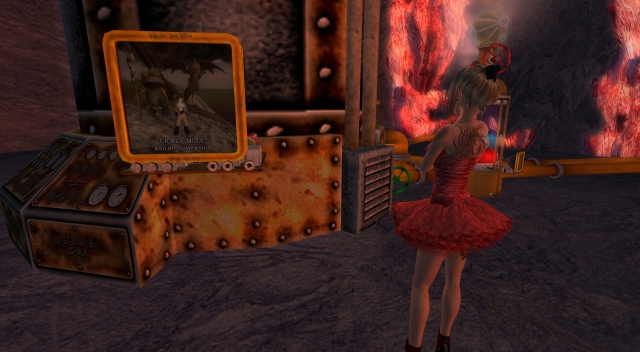