Sometimes I manage to surprise even myself when it comes to the inspiration for these posts. Walking home from the station yesterday, it seemed that every few metres there was a discarded condiment wrapper lying on the path – the sort you get in cafés and takeaways. “It’s like this is Condiment Street”, I thought to myself, and the germ of an idea was born.

People in SL, when inworld, can fall very easily into stereotypes – more so than they might do in RL, I’d suggest, because the virtual world does tend to draw focus upon certain character traits, and we ourselves capitalise on the freedom of expression that the virtual environment fosters. Consequently, there are a number of instantly recognisable avatar types that I think could benefit from their own system of identification… The Haven Condimentary Avatar Classification System.

Is a work in progress, but this is what I have so far:

The Vinegar Avatar
The sort of person who has a habit of saying things in open chat about other people that makes you wince. Invariably, they usually manage to say it with appallingly bad timing, just as the poor avatar in question walks into chat range. Not only is Vinegar totally oblivious to their incredibly inappropriate comment, but by virtue of the fact you were party to the offending conversation, you now become the unfortunate victim, as the person slighted now thinks you’re complicit in the slander and views you as their mortal enemy!

The Tomato Ketchup Avatar
The overwhelming impression you receive can probably be summed up by the words ‘voluptuous’ and ‘bubbly’, this applies to both their character and their appearance. They’re the sort who will smother you with kindness and simultaneously smother you in a massive inworld embrace, from which you have no hope of escaping. Ketchup, like the condiment can at first be tricky to entice out, but once they are out, they’ll be all over you… And the floor!

Brown Sauce Avatar
Brown is the complete opposite to Ketchup. Whilst some may see them as slow and stuck in their ways – they still wear underwear baked into their system skin, and flexi-prims are a fashion statement too far – the reality is that they are simple, down to earth avatars who know what they like, and stick to it. Everybody needs a Brown Sauce in their friend’s list, because although they’ll drive you mad with their appalling fashion sense and constant procrastination, they’ll always stick up for you and fight your corner.

Salt Avatar
Salt is a bit of an enigma – these avatars can be irascible, anti-social, antagonistic and they do not suffer fools gladly. They have a cynical and pragmatic view of the virtual world, although that’s not to say they’re incapable of humour, albeit somewhat dry and occasionally morbid. Salts provide an essential seasoning to SL, which would otherwise become far too frivolous and fun-filled for its own good. 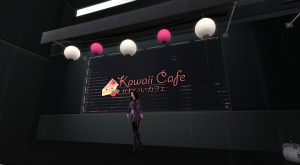 Pepper Avatar
You might suppose that Pepper would be the opposite to Salt, but not so. Pepper Avatar is actually the less predictable cousin of Salt – equally jaded and cantankerous, but with a tetchy streak that means they can be a little volatile. Try and befriend them, and you’re likely to be rewarded with a torrent of abuse and a kick up the pixellated butt – don’t take it personally, it’s not you – it’s them.

Sugar Avatar
Sickly sweet, fans of dressing-up, baby speak and playing games. They can be incredibly tiresome, and once they’ve formed an attachment to you, I’m afraid you’re stuck with them. Unfortunately for you, they may be sweet and delicious on the outside, but upset them and they’ll turn on you like something out of a 1950’s horror B-movie!

Salad Cream Avatar
This virtual grouping are an enigma: Despite giving the impression of being perfectly nice and enjoyable people to have around, they’re actually pretty slimy and unpalatable, and have a habit of ruining anything they coming into contact with. They are the sort of avatar who’ll come across as friendly, but five minutes later they’ll proposition you with a sleazy IM inviting you back to their dungeon for freaky furry bondage sex.

Thousand Island Dressing Avatar
These look the part, with their perfect bodies, gorgeous clothing, fabulous hair and the very latest in mesh acoutrements. If anyone is going to have bento bits, and all the latest in innovative enhancements, it’ll be these. Be aware though, these guys are not always what they see, under the shiny veneer of loveliness, and hint of tropical promise, they have little of substance about them… Just as RL Thousand Island is nothing but mayo and ketchup, these avatars are pretty basic and boring beneath the surface – if you’re looking for scintillating conversation and intelligent observation, I suggest you look elsewhere!

Chilli Sauce Avatar
Hot stuff, possibly far too hot for your tastes – be very careful taking on a Chilli. Hot tempers and a fiery disposition means that you’ll spend most of your time fire-fighting drama and pouring oil on troubled waters.

Marmite Avatar
You either love them, or you hate them!

Balsamic Vinegar Avatar
BVAs are the real deal: Expensive tastes, refined, stylish, desirable and seen in all the best places, with the best people. The sort of avatar who thinks nothing of joining groups that charge for membership, and they will expect to be treated in the manner to which they have become accustomed. You’ll need deep pockets and oodles of time to lavish on these avatars, and in return, well they may just grace you with their presence, provided you come up to scratch!

So, on the condiment shelf of SL… Where do you sit?

Cut my eyes out, dear
So I can’t see your smug grin
You’re right you always win
Snow Patrol – Get Balsamic Vinegar Quick You Fool

This entry was posted in Half-Baked, Philosophicalisticality, SL. Bookmark the permalink.