Posted on October 8, 2018 by Serendipidy Haven 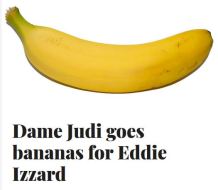 Am I the only person baffled by the strange continuity links that TV companies seem to think are essential to keep viewing audiences amused these days? Not owning a TV myself, I’m not sure how long this has been a thing, but a thing it is, and it makes no sense to me at all.

Perhaps I show explain what I’m waffling on about… It’s this weird practice of splitting the screen the moment the end titles start to roll, whilst a schedule of upcoming programmes appears on one side, overdubbed with some increasingly weird sounding continuity announcer repeating what is appearing on the screen in front of us.

The annoying part, of course, is that Yours Truly is then completely unable to read the credits, now shrunk to half a screen’s width, and consequently never finds out who that maddeningly familiar actor, whose name completely eluded me was, or what that particular piece of music that I simply have to have in my collection might be called!

It must also be pretty frustrating for all those hardworking cast and crew who poured their heart and soul into the production, only to have their moment of glory, as their name scrolls down the screen, completely ruined in favour of us being told that the football is coming up next. Having, in the past, been involved in film production, it strikes me as a particularly callous way of telling ‘Woman at launderette’ or the Second Unit Key Grip that their efforts are of no consequence to anyone and that what might turn out to be their one and only shot at 15 minutes of fame may as well have been edited out before release.

Whilst working away this week, I managed to stumble – as only I can – onto the set of ‘Six Minutes To Midnight‘ which stars Dame Judy and Eddie Izzard, (stumbling onto movie sets is something of a recurring theme in my life, as reflected on the occasions I’ve find myself accidentally on the set of both Casualty and Doctor Who!). Professional discretion prevents me from revealing whether or not Eddie, Dench and I did lunch, but I can say that Eddie is an extraordinarily nice bloke, and rather more attractive in RL than on the screen. At the end of a long day’s filming, as the extras and supporting cast were ushered into minibuses – (the stars had chauffeur-driven Mercs with tinted windows) – I did however connect with ‘Slim Edwardian Lady in Pretty Yellow Dress’ as she climbed aboard the bus. I couldn’t help thinking what a shame it would be, as her family, clustered around the screen in years to come, that they would need to pause playback and dig out a magnifying glass just to spot her name, because some berk thought people would be more interested in seeing that ‘Animals Do The Stupidest Things’ would be on after the news. I think that’s rather sad. 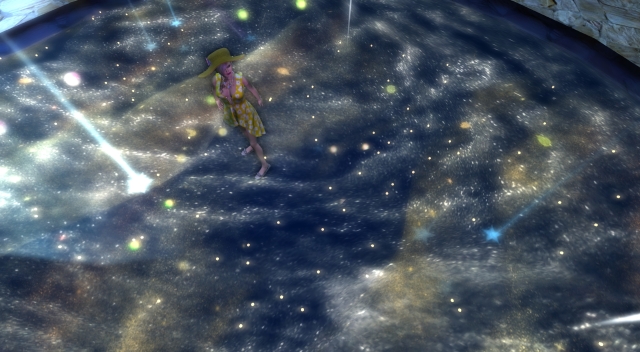 It’s for moments like that that one of the better aspects of SL, as far as I’m concerned, is the permissions system. I love the way that you can select ‘edit’ whilst looking at an object and it doesn’t matter what its history, whether shape, colour, ownership or whatever has changed; there, tucked away inside and open to inspection by whoever happens to have a passing interest, is revealed a simple credit: The creator.

To me, seeing the content of that little box is rather like the moment Captain Kirk rubs away the dust covering the probe in the first Star Trek movie – and suddenly everything makes sense, (as if we hadn’t guessed already!).

On so many occasions, that simple creator’s credit has been the missing link and the vital clue that has enabled me to track down many an object of my desires along with some of the ancient history and social commentary of SL. All because a name that might otherwise have been forgotten or lost in the miry bog of time was preserved as an intrinsic part of their work. In SL what you create remains testament to its creator. Even after you’re long gone, there’s always going to be something of you that remains – something that anyone with a curious nature can discover with no effort whatsoever.

It’s rather cool, I think, that SL is littered with clues and credits that reflect the genius of the people who’ve made it what  it is. And, unlike on the telly, you don’t have to come right up close to the screen, squint, and try not to blink at the crucial moment, just to find out who the hell it was!

Oh, and if I miss it – if you get to see Six Minutes to Midnight, keep an eye open for ‘Slim Edwardian Lady in Pretty Yellow Dress’, and let me know her name 🙂