During my formative years, which are apparently the best time to acquire any sort of language skills, I completely failed to rise to the challenge of learning any foreign tongue. In fact, I was rubbish at it. Come the time to ‘pick my options’ – schoolspeak at the time for choosing which subjects were going to underpin my path for the rest of my adult life – I was summoned to the headteacher’s presence to justify being the only pupil in the school to have point-blank refused to take a language at O-Level, which was supposedly a mandatory requirement. Nevertheless, my language skills were apparently sufficiently eloquent to persuade him that to pursue a language at that stage of my life would be a fruitless exercise, and I’d be far better occupied with a meatier subject, such as, erm… Film and Media.

Oddly though, as an adult, I’ve not struggled with languages at all. Over time, I’ve picked up a pretty good grasp of Japanese grammar and vocabulary; I can just about get by in Spanish, French, Italian, Welsh and a smattering of German, fairly competently read and translate first century Greek, and can order a beer, ask directions and exchange pleasantries in Kiswahili, Arabic, Thai, Indonesian and Malay! Don’t ask me how, it’s just stuff I’ve picked up along the way.

However, I have made more formal attempts, on at least a couple of previous occasions, to properly learn Spanish, although I’ve never really got beyond the first few lessons before becoming bored and frustrated. The problem that I run into every time is that it’s all rather dry and contrived and I’ve realised over time that the only way that my brain is able to take on board another tongue, is to be immersed in it: I can try my best for months to pick up a foreign language before heading off on holiday, with little success, but after two weeks away I’ll have become far more proficient from simply being immersed in the real thing than any amount of study.

Being acutely aware of my own challenges when it comes to learning a foreign lingo, I can’t help but be impressed by the people I know in SL whose first language isn’t English, yet manage to converse effortlessly inworld, often to the extent that you’d never know they were speaking in an alien tongue. I know quite a few people who fit into that bracket, and I find it even more astonishing when you consider the mental gymnastics they have to perform in order to accomplish that feat. First, there’s the translation of what’s appearing on the screen, on the fly, into a form that the brain can understand; then, there’s formulating a response; next, there’s the mental translation back into English; and finally, typing out that response in a language that’s not natural to you. My brain hurts, just thinking about it. 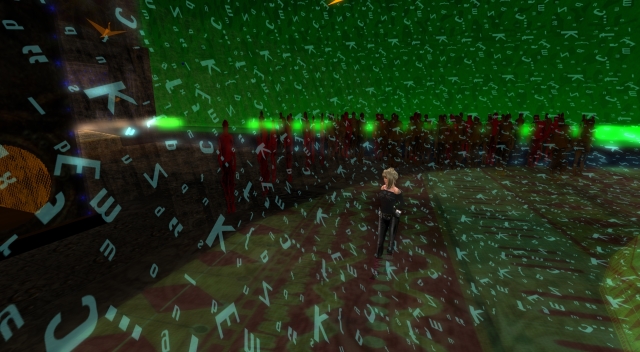 It’s even more incredible when you consider the often ridiculous nature of SL conversations, the typos and the multiple topics that tend to be tossed around across each other whenever people are gathered inworld. It’s seriously impressive, and I applaud those who seemingly breeze through such situations with little difficulty.

And that’s one of the reasons that it pains me to open a profile belonging to a native English speaker to find a garish array of words that appear to have been thrown together with no thought for structure, grammar, spelling or meaning. Now, I’m no grammar nazi, (being a blogger, that’s rather a dangerous position to assume; even writing on this topic is just asking for trouble), but when I read the appalling drivel that passes for language in some profiles, there’s a part of me that dies inside, embarrassed on behalf of the rest of the English-speaking world. It’s rather futile – don’t you think – for someone to boldly state ‘Pet hates – U and 4 are not words’, when the rest of their profile is a barely decipherable mutilation of the language, littered with misspellings and apostrophic gaffs?

I can’t help but wonder about the person behind those words… Who would pay such little attention to constructing their primary means of introduction to strangers that they come across as a blithering idiot? Can I really be expected to entertain entering into a spontaneous conversation with you if something into which you should have expended a little effort in crafting is so obviously crap? To me, it’s a bit like walking into a job interview for investment banking, dressed in a boilersuit and carrying a chainsaw… It really does give the wrong impression, (although the blind terror that might engender may well get you the job!).

Maybe I’m just being a bit of a snob, after all – ‘Your world, your imagination’ – but, then again, what’s wrong with showing a bit of pride in how you present yourself to the virtual world, especially when those less equipped to manage the job seem to do so much better than those who really should know better?

But, then again, as the Spanish say, “¡El que tiene boca se equivoca!”

Baby, do you understand me now?
Sometimes I feel a little mad
The Animals – Don’t Let Me Be Misunderstood

This entry was posted in Philosophicalisticality, Rants, RL, SL. Bookmark the permalink.