It’s a rare occurence that I’m temporarily lost for words, but it happened last night, and I’m still mulling it over today.

I’ve been reminded, yet again, that in the contrived arena that is SLife we are cursed with the ever-present likelihood of being wholly misrepresented and character-assassinated, purely as a result of other people’s misinterpretation of our actions.

Last night, in a public conversation, it was revealed to me that, apparently, one of my strong character traits is… My temper.

Excuse me? Did I read that right?

It’s a classic case of making an observation of somebody else’s character and applying one’s own standards to it, thereby completely misreading the signs and coming to the wrong conclusions. It’s something that the media routinely do intentionally to manipulate the audience to see a story from a specific perspective – both in word, image and video – the difficulty this presents to us is that it’s very difficult to disbelieve ‘the facts’ that we’re seeing with our own eyes; however, if the facts we are being presented with are manipulated, the conclusions that we’ll arrive at are unlikely to be objective, or correct. Similarly, as is often the case in SL, when we aren’t provided with a context within which behaviours should understood, we can easily jump to the wrong conclusions and make judgements that are strongly influenced by our own perspectives and experiences. 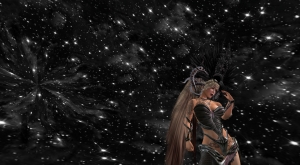 Which brings me back to the case in point. Those of you who have been long-time readers of this blog, or are in the unfortunate position of ever having had a heart-to-heart with me in SL, will know that there was a time when you would have been more than justified in accusing me of having a temper. Basically, a long time ago, I had a horrible, destructive, evil temper that I would invoke without provocation, frequently, and with predictable results. It resulted in broken relationships, ill-feeling, much unhappiness, and – on one memorable occasion – a fist-shaped hole in a wall.

Eventually, I reached a conclusion that things had to change and I taught myself to become a much more pleasant person to be around. I made a conscious effort to change and to step away from situations, rather than lose my rag. And it worked. I can honestly say that it’s now more than 10 years since I last lost my temper, and in all that time I’ve had only two arguments – there was a time that I would have said that was impossible, and I’m sure some of you may also struggle to believe it’s possible, but you’ll have to trust me on this.

That’s why it was such a shock for my ‘temper’ to be cited as an SL character trait.

However, on reflection, I realise that the way I am today is probably not the norm for most people. The majority of people will occasionally lose their rag and probably consider a good argument now and again as healthy and necessary – that’s probably the benchmark from which most people will apraise the behaviours of those around them. I suppose that people, having no other frame of reference or context, will therefore intrepret some of my behaviours coloured by their own perspective – much as we’ll accept the ‘facts’ of a biased news story when we have no background information to allow us to be objective.

I may no longer be an angry person, but I am principled, and I can be pretty forthright too. I’ve learned that there’s little to be gained in life from pussy-footing around and that it’s always better to be unequivocal when presenting one’s case, rather than ambiguous. This is particularly true in SL, since far too many people seem to think that hiding behind a monitor and a virtual presence gives them free reign to behave inappropriately or without regard for others.

In practical terms, this means I do not tolerate fools gladly, I don’t give second chances and I will, when necessary, firmly and assertively express my views. I have few qualms when it comes to muting, blocking and ejecting those who trouble me, and I have little patience with depressing, neverending conversations that monopolise open chat on topics in which I’ve no interest, whether it’s motor mechanics, football, Brexit, politics or Covid… I reserve the right to absent myself from such environments and find somewhere more enjoyable to be instead.

Those are all rational, adult and reasonable approaches to dealing with a variety of inworld situations that can arise, sometimes frequently, but I suppose that looked at from the perspective of someone for whom emotional conflict is an everday, or at least regular, occurence, (i.e. Normal people!), they may well interpret a forthright statement or leaving the scene as a manifestation of a lost temper. It’s not. Feisty, it may be – but never a temper tantrum, I promise you.

This entry was posted in Philosophicalisticality, RL, SL. Bookmark the permalink.