Posted on October 13, 2011 by Serendipidy Haven

Is this complete foolishness? Why stop here – right in the midst of my enemies? All of my senses scream at me to leave; to put as much distance between myself and the Elite but my instinct to survive says otherwise. Out there, in the abandoned sims, the wastelands and empty spaces, i am an easy target. Alone and isolated, i would stand out – a beacon to my enemies and an invitation to any who would seek me. Here, there are hiding places and the dark shadows mask my presence. i am unlikely to be alone, but equally unlikely to be discovered or considered out of place. Besides, who will think to search for me in the very place i would seek most to avoid? There is also part of me that is curious about the Elite’s intentions – perhaps i might learn something new, whilst i am here?

The city – for that is what this place is – is a stark contrast to anything i have seen for over a year: It is sleek, functional and hums with life. To someone for whom decay, decrepitude and silence have become the norm, it is unnerving. Although i have seen no-one, i am acutely aware of the presence of others and my radar confirms my prescience. The city feels alive and malevolent and there is a tension in the air – like the build up to a thunderstorm – the buildings brood ominously over the city beneath, like dark sentinels, guarding this bastion of the Elite’s presence.

The overriding impression i have of the city is one of purpose – there is nothing whimsical or, for that matter, ‘human’ here; everything is starkly utilitarian and, somehow, it seems to be in perfect accord with everything i have learned about the Elite. It is uncaring, dispassionate, dark and there is nothing that appears without purpose or function. Is this what the future holds – faceless, bleak forms that deny warmth, feeling and humanity? i feel a sudden pang of sorrow for the old town i have left behind me: Defeated, empty and broken, it may have been but it was more full of life and vibrance than this monstrosity of a city could ever be. Yet, the city was alive – lights stabbed the darkness and arced across the sky, causing my eyes to flicker and blaze with neon after-images; sleek vessels whined and hissed through the streets, going about their unknown business with robotic precision and, now and again, the crackle and flash of electricity filled the air causing the hairs on my arms to twitch. 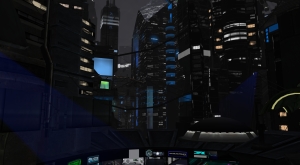 This is no place for me. As i roam the streets, ever mindful that there may be others -my enemies – abroad also, i wonder whether this is to be the future of the Grid. Is this the intention of the Elite – to create vast dark cities, devoid of life and reeking of dismay? What about people – avatars like myself? As night draws on, my mind fills with nightmare visions, each with its own subtle variation on the futility and frailty of life when faced with an adversary of seemingly unlimited power and unknowable designs… cities like this, devoid of life; fuelled and powered by the pixels of rendered avatars… i remember the faces of the Lost and try not to dwell upon their possible fate.

Throughout the night, i wandered the forbidding streets, hiding in the shadows and crouching in alleyways. i feared discovery, and worse, but never once saw any sign of real life – yet i dared not sleep – the horror was all too real. i toyed frequently with the idea of entering a building, but few had any recognisable entrance, and those that did exuded

such an overwhelming air of tangible reproach that my resolve failed whenever i drew near. These buildings, at least, would retain their secrets. My mind played tricks… bringing back memories of all those places where i had been provided shelter and succour – all too often ending with fear and flight: Old Manhattan; the subways; my lofty crane cab and the desecrated church. i remembered the terror of the outpost in the wastelands, the abandoned factory and the stifling claustrophobia of the Elite’s compound. i recalled the time spent in the depths of space, with the lost souls of thousands of lifeless avatars, my only company and, with a stab of regret, the old town – my home – now empty and lifeless.

As dawn tinged the sky, with glowing fingers of light, i vividly recalled that day – so long ago – when first i stared out from behind a sewer grating and resolved to see this through to the end…

Dawn! Somehow, night was done and i had no wish to remain any longer in this stricken place. i knew where i was heading – the place where monkeys dance – if all was well, tonight i would be in the company of others… survivors, like me… Friends!

My eyesight, blurred with tears that would not stop their flow, i took flight… heading towards the rising sun and leaving the city far behind me – a new dawn, at last.

“Cities are the abyss of the human species”
Jean-Jacques Rousseau